Food is the first priority. Songjiang's traditional food is an important part of its local culture.

SongjiangSongjiang, since ancient times, has been a famous region that yields fish and rice in the south of the Yangtze River. The climate is pleasant here with ample rain, suitable for the growth of various crops. High-quality rice produced here is renowned nationwide. In the Ming and Qing dynasties, the area around the Cangqiao Bridge in Songjiang was the storage and trading center of official food, the well-known "National Barn".

There is a custom among farmers in the Songjiang District. During the Spring Festival, they would make glutinous rice cakes using the high-quality rice produced locally. These rice cakes also make an auspicious gift for their friends and relatives, for the cakes (pronounced as "gao" in Chinese) imply the expectation of getting promoted (pronounced as "gao" in Chinese), earning more, and being lucky in the new year.

Glutinous rice cakes are made of high-quality glutinous rice, through a complicated manual process of screening, grinding, drying, rubbing, and steaming. The rice cakes are crystal white, sticky, and delicious, rich in trace elements and nutrients necessary for health. This food has become a widely popular local specialty and is given as a present owing to its distinctive local flavor. 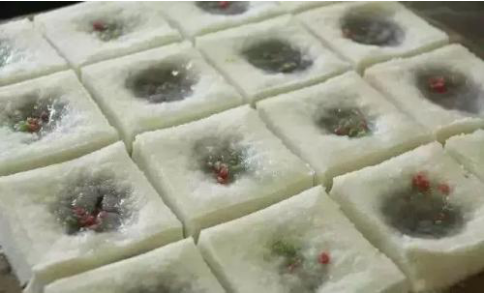 Huangpu hairy crabs originated from the upstream area of the Huangpu River. They are a famous specialty of the Songjiang District for their delicious meat and unique appearance—green back, white belly, golden claws, and yellow hair. Huangpu hairy crab farming has been suspended since the 1980s, due to floodgate building, water pollution, and other reasons. However, over the last two years, Shanghai Yuyue Aquatic Product Cooperative and relevant government agencies have joined efforts to bring back this Songjiang specialty through a series of new ecological technologies, such as scattered breeding of crabs, grass planting in ponds, oxygenating under the water, water quality regulation, and natural breeding of crabs. In the fourth Harvest Cup National River Crab Competition last year, Huangpu hairy crabs won the Most Tasty and the Gold Crab awards. 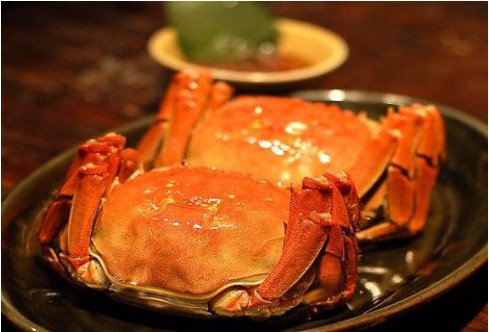 Sheshan abounds in juicy peaches. Sheshan has a long history of producing juicy peaches. There are over ten kinds of juicy peaches, such as Gangshanzaosheng, Yuhualu, Baifengyulu, yellow peaches, and Yingqing. They are sold early with a long supply period, high sweetness, and good taste, and are listed as the top among the suburban fruits. The most famous kind is Baifengyulu peaches, which have thin skin, crunchy flesh, sweet juice, and a cool and nice taste. They are not only a good choice to relieve the summer heat, but also a nice present for friends and relatives. 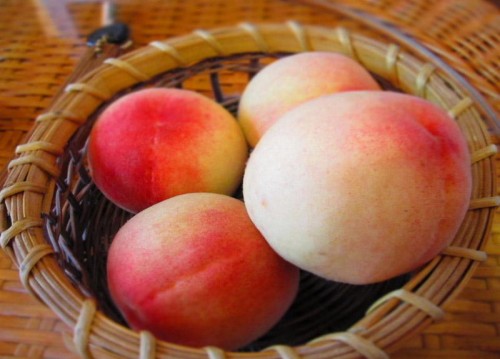 Manongkou dried tofu is a Songjiangtraditional local specialty with hundreds of years of history. It is chewy and delicious, and can be prepared in various ways such as dicing, slicing, or mixing with celery. It is a good snack for traveling. SongjiangBass are bred only in Shanghaithe area under the Xiuye Bridge in Songjiang. As a Songjiang specialty, bass have been well known throughout the country since the Wei and Jin dynasties. They have tender, fat meat, and a delicious, non-fishy taste, with no small fish bones. They are among the most delicious kinds of fish, and one of the four most famous kinds of Chinese fish. Songjiang bass appear in the shape of a spindle, about 12 cm in length and 100 to 150 g in weight. Sliced bass and bass soup are two renowned dishes. 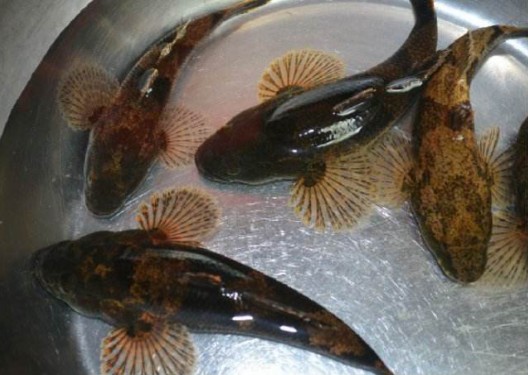 According to the Sheshan Journal, SongjiangSheshan is a good place to grow peaches owing to its geographical advantage. There are more than ten kinds of peaches. For example, the Shoutao peach is as big as a melon; the Daitao peach is purple; the half-jin peach weighs a half jin (250 g); and the Yellow peachyellow peach has both yellow skin and flesh. Songjiang yellow peach Songjiang yellow peach is big and sweet, with a small stone and a thin skin. Its yellow flesh is crunchy and can remain fresh for a long period.

This type of peaches is also one of the few famous kinds of fruit that can be canned. They have been an auspicious food since the ancient times. Songjiang yellow peaches, Shoutao peaches, and juicy peaches were all first class tributes, and  have gradually become one of the four major specialties of Songjiang.

Yexie is located in the southSongjiang of Songjiang, near the upstream of Huangpu Riverthe Huangpu River. It is the ecological water protection area of ShanghaiShanghai. Yexie boasts a criss-crossed network of rivers and lakes with a high-quality ecological environment that caters to the growth of poultry. Since ancient times, local farmers have been breeding chickens, ducks, and geese, which are kept in a free-range manner. The poultry are fed insects, herbs, and crops, with no pollutants involved, making them a real green food.

Safe and delicious: In particular, the eggs produced locally are large and round, with a ruddy eggshell and rich nutrition, which make them popular around the country.

Yexie marinated eggs are made of the local eggs in combination with the sauce of golden-paw geese and multiple spices, through a set of advanced production processes and vacuum packaging technologies. They are convenient to eat, taste smooth and tender, with a rich aroma of goose meat, giving a highly impressive flavor. They are nice snacks for traveling and leisure, FlavorSnacksand a local delicacy in Songjiang.